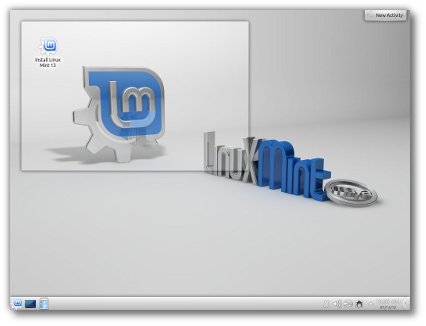 By default, this edition uses the Mplayer plugin which is able to play MP3 songs in Firefox but doesn't work with Quicktime. If you install the package "totem-mozilla", Quicktime content and websites such as Apple Trailers will then work in Firefox but you will lose the ability to play MP3 from the browser. Neither plugins work with both Quicktime and MP3 at the moment.

An upstream issue in the kernel prevents Linux Mint 13 from booting on computers with b43 wireless cards. If you're in this situation, try the following:

For more information on this problem, please read this bug report.

Linux Mint 13 is based on Ubuntu 12.04. Make sure to read the Ubuntu release notes.

In Linux Mint the boot splash screen is completely black. This is by design. Once the system is installed the boot sequence is relatively fast. The black loading sequence doesn't look out of place and it looks consistent across all computers, whatever driver you're using. If you'd rather get a splash screen you can select one by typing the following command and selecting mint-logo:

GnomePPP is not installed by default but it is present within the default installation of Linux Mint. Your Linux Mint system comes with a local repository which is disabled by default. You can enable it by removing the comment sign "#" in /etc/apt/sources.list.d/local-repository.list and refreshing your APT cache. This repository contains GnomePPP as well as a collection of drivers.