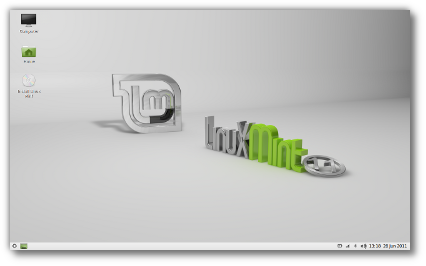 Moonlight was removed from Linux Mint because of a bug that made Firefox crash. The bug was fixed upstream and you can install the Moonlight plugin from the project's website.

Due to an upstream compatibility issue this release is not recommended to owners of Intel 855gm chipsets.

Linux Mint 11 is based on Ubuntu 11.04. Make sure to read the known issues related to this release.

Linux Mint 11 inherits the newly introduced "overlay scrollbars". If you would like to use traditional scrollbars instead, you can deactivate them by removing the "overlay-scrollbar" and "liboverlay-scrollbar-0.1-0" packages and by restarting your computer.

In Linux Mint 11 the boot splash screen is now completely black. It doesn't show a logo with green dots as it used to. This is by design. Once the system is installed the boot sequence is relatively fast. The black loading sequence doesn't look out of place and it looks consistent across all computers, whatever driver you're using.

GnomePPP is not installed by default but it is present within the default installation of Linux Mint. Your APT sources point to a local repository in /usr/share/local-repository to which GnomePPP was added.